Q. I like to use sour cream in stroganoffs, sauces and even just a nice addition to soups and casseroles. The trouble is, the sauces often split very easily, even when I bring them up to room temperature. Mainly because I live in a cold area and tend to avoid using the central heating too much in winter. My ‘room’ temperature is probably not what the recipes mean by room temperature so adding sour cream to hot food tends to make it look awful. The flavour is just fine but I’d like it to be more presentable when I have guests for dinner. Also, if I do have people over, I tend to run out of stovetop space as I have lots of cooking on the go. Is it ok to heat up sour cream in the microwave or is it going to be a messy, overheated nightmare? 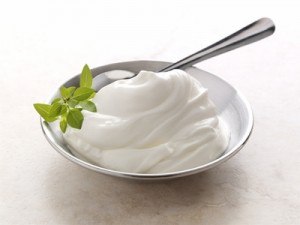 A. Yes, you can heat sour cream in the microwave. The best method is to do it in short intervals so that it doesn’t become too hot. This works well when using sour cream in sauces or for bringing it up to room temperature before adding it to hot food, such as a stroganoff.

Start by measuring your sour cream in tablespoons and allow a total of 15 seconds for each tablespoon of sour cream at high power. If it isn’t warm enough, keep microwaving in short 5 second bursts until you reach the desired temperature. Remember though that it will continue to increase in temperature after cooking in the microwave so do stop before it becomes hot. For best results, use full or half fat cream. Low fat cream or sour cream has a higher tendency to curdle when adding it to hot dishes.

Another method to bring sour cream up to temperature for adding to hot dishes is to add a little of the hot liquid from your food to the sour cream to help it warm slowly. Also, try keeping it close to the stove while cooking if you are in a cooler part of the world. If all else fails and the sour cream has curdled, try thickening some of the hot liquid with corn starch and adding the thickened mixture back into the food while stirring, it can help improve the appearance of the dish and it will not detract from those delicious flavors.