Q. I recently came across rumors online that Pyrex kitchenware can explode if you put it in the microwave. After reading this, I realized that pretty much everything I use for cooking is from the Pyrex brand. Some of them are even heirlooms. I haven’t had any issues using them in the microwave yet, but now I’m reluctant to risk putting any of my dishes in there. Can you microwave Pyrex supplies safely? Or do I need to keep reheating everything the old-fashioned way? 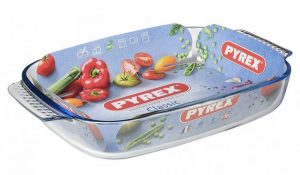 A. In the early days of the internet, exploding Pyrex was an urban legend that practically reached mythical status through viral sharing. With a quick Google search, you can still find plenty of anecdotal accounts detailing claims related to Pyrex shattering upon being microwaved. These stories paint quite a terrifying picture. So, can you microwave Pyrex without the threat of a random bomb blast?

Let’s start with the good news: Pyrex will not spontaneously combust simply by being placed in the microwave. The material is specifically formulated for cooking, which means it is meant to withstand high temperatures. The makers behind these products insist that Pyrex is safe for use in microwaves. The company has vociferously pushed back against the widespread portrayal of microwave malfunctions for years, but the PR damage has been done. Despite proof demonstrating the exact opposite, much of the public is still under the misconception that Pyrex is not microwave safe. With the correct precautions in place, the majority of their line can be used without issue. According to the manufacturer’s representatives, proper heating protocols are essential for safely microwaving your Pyrex products.

Ultimately, the notion of Pyrex detonating without notice has been wholly debunked. Even Snopes stepped in to try and rectify matters. Of course, they also state that the fine-print instructions must be followed to minimize hazards. In effect, the company places the blame for all documented incidents of Pyrex eruptions on user error alone, and the online whistle-blower agrees with this characterization. Overall, the structural composition of Pyrex is not foolproof, so there are a few caveats to keep in mind before zapping your china.

Most Pyrex creations contain explicit warnings about sudden changes in temperature. Drastic swings between cold and hot are to blame for most breakage incidents. A lack of gradual acclimation is the real culprit here. Basically, plates and bowls should not be directly relocated to the microwave from a refrigerator or freezer. The rapid shift in degrees will put an unexpected strain on the Pyrex, and the resulting tension may lead to instantaneous cracking. Similarly, icy water may shatter the material if it’s still warm from the microwave. This type of misuse is where most of the fulmination rumors originated.

Even if the odds are only one in a million, you don’t want your Pyrex cabinet to end up as that woeful singular statistic. Luckily, all you need to ensure your Pyrex’s longstanding protection is the right handling strategy. One preemptive solution is to reheat food on a lower setting over a longer period. This process requires a little extra patience, but it will achieve the same level of warmth without the looming psychological threat of an improbable kitchen catastrophe. Furthermore, always make sure the plate or bowl is relatively full. An empty dish will take in the heat much faster without food present to absorb it, and the lack of centralized temperature dispersion exponentially increases the danger of Pyrex destruction. Also, it might be smart to upgrade your microwave, particularly since outdated models can leak radiation and cause an overabundance of heat, which can be majorly detrimental to the well-being of your prized Pyrex catalog.

As an aside, you also mentioned that some of your Pyrex collection is comprised of heirlooms. I honestly hope that you are not microwaving the older pieces in your set. This isn’t really a safety concern, although some of the items may have been made prior to the inception of microwaves. Instead, I’m merely recommending that you get the vintage china professionally appraised, because some of the earliest Pyrex products are now considered invaluable among antique collectors.

Think about it this way: You wouldn’t microwave your grandmother’s old jewelry or your grandfather’s vintage watch. It may actually be wise to treat your Pyrex hand-me-downs with the same reverence and respect. Aside from their immense sentimental value, these inheritances could be seriously lucrative in the right marketplace. Pyrex is incredibly durable, which explains why so many families are likely to have the cookware passed down through several generations. After surviving for over a century, it would be a shame if some of the renowned brand’s flagship designs succumbed to a faulty interaction with a microwave.

In contrast, you can also cultivate a fun educational experience with any disposable Pyrex pieces you might have lying around, especially the mass-produced modern ones. By exposing the material to extreme changes in temperature, you can construct a mini science lesson on the fly, and it might conveniently culminate in a loud bang. In most instances, nothing will happen beyond an anticlimactic crack. You never know when the conditions will be just right to foster a thunderous boom alongside a cacophonous ricochet. Logically, the Pyrex brand would probably not advise this approach, but who are they to decide when their product’s viability outweighs the importance of gaining academic insight through kinesthetic engagement?

To recap: Pyrex can be microwave safe, but you need to be safe about it too. Follow the company’s straightforward instructions, and you will avoid any potential cooking calamities. If the safety guidelines aren’t printed on the product yourself, they can be easily located online. Aside from a few obscure pieces, caring for Pyrex products is pretty much a universal process. The rules of engagement between Pyrex and microwaves don’t vary substantially between their dishes!

2 Responses to “Can You Microwave Pyrex?”