Q. I often reheat foods in Tupperware containers. Pre-made lunches, leftovers and such. Is that bad? Some of my friends have been saying that it’s bad to heat food in plastic, and I get that, but can you microwave tupperware? 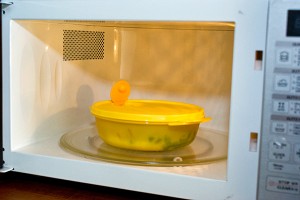 Can you microwave tupperware?

A. An avid inventor named Earl Tupper conceived and created Tupperware in the early 1940s. Later, In the early 1950s a single mother called Brownie Wise joined the Tupper Corporation and introduced the “Tupperware party” concept. She had such great success that Tupper removed all products from retail outlets and made her their sole distributor, making her party the company’s sole method of distribution.

Around the world today, a Tupperware party starts every 2.3 seconds, while in Australia and New Zealand a staggering nine out of 10 homes own at least one piece of the famous plastic.

On checking with Tupperware about use in microwave ovens, their use and care guide suggests “Microwave Tupperware products are not designed for cooking and therefore are not recommended for use in a microwave oven except for TupperWave Stack Cooker, Rock ‘N Serve and CrystalWave reheatable products.”

Tupperware themselves also say ““In its continuous search for the best materials for use in its products, Tupperware has found other materials with improved performance characteristics that have been approved by regulators to be BPA free to replace polycarbonate. As of March 2010, items sold by Tupperware US & CA are BPA free.”

So it comes to knowing what product you have. Know it’s uses and misuses based on the labeling and know if it’s made prior to 2010. If you understand the symbols and you’re using microwave safe Tupperware then I don’t think you should have much to worry about. If regardless, you find yourself uncertain, just don’t use plastics in the microwave at all. Ever.

One Response to “Can You Microwave Tupperware?”