Q. I make oatmeal for breakfast for the whole family most mornings. It’s the one breakfast food that everyone agrees on! Everyone prefers their oatmeal made with milk instead of water, so most days I make it on the stove. Sometimes if we’re late or in a hurry I make it in the microwave using water, but it just doesn’t taste the same and the kids don’t always want to eat it. I would love to be able to make oatmeal with milk in the microwave as well, but I know that milk will scald if heated too much. I don’t want to try it on one of the days we’re in a rush and have it come out wrong. Can you microwave oatmeal with milk? 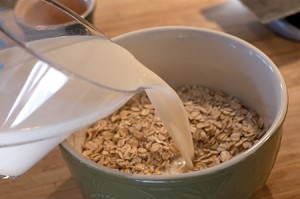 can you microwave oatmeal with milk?

A. Yes, you can microwave oatmeal with milk. It’s so simple, you could even teach your kids to do it! You’re correct in mentioning that milk scalds quite easily, which is why even when cooking with it on a stovetop it is important not to let the milk come to a boil. The film that gets created when milk burns will ruin the taste and texture of your oatmeal. To microwave oatmeal with milk safely, it’s important to cook it at a lower temperature.

Mix your oatmeal and milk together in a microwave safe bowl, allowing room for expansion. The oatmeal will not only expand while cooking, but may puff up in the microwave as well. If the bowl isn’t big enough, it may spill over the edges. Stir the milk and the oatmeal in well. You may want to add a touch extra milk than you would while making it on the stove, or you can add some extra milk at the end if needed. Cook the oatmeal for 1-2 minutes on medium high heat, then take it out and give it a stir. This method works best with instant or quick cooking oatmeal. For other cuts of oatmeal, check the package.

Allow the oatmeal to stand for another few minutes. This is when some of the cooking happens and the milk gets fully absorbed. If you skip this step, you will be eating runny, uncooked oatmeal! If the oatmeal seems too thick or gooey, add some more milk. Season with cinnamon, sugar, raisins, or your favourite oatmeal topping.