Q. I want to make those rice cereal treats with my girls on the weekend, and I want them to be able to feel like they can do most of the preparation by themselves. They are quite young, though, and I don’t feel comfortable letting them stand over a stove to melt the marshmallows on their own. I have always prepared these treats using the stove though, and I don’t want to try something new only to have it fail. My daughters would feel as though it was their fault, and they might lose their confidence to try cooking again as a result. I would like to try to melt the marshmallows in the microwave instead of on the stovetop, because I think it would be simpler and safer for my young girls to do. I just want to make sure it will work! Can you microwave marshmallows! 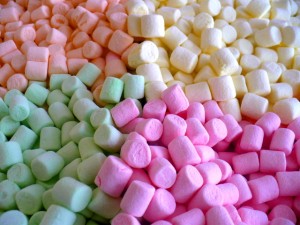 A. I think that allowing your girls to try and make something by themselves is a great idea! It’s important to get kids cooking in the kitchen, and starting with something simple is the perfect way to start. As for your question, yes, you can microwave marshmallows.

Marshmallows puff up quite a bit when placed in the microwave, so it’s important to place them in a microwave-safe bowl that’s several times larger than the amount of room the marshmallows take-up. They will puff up when heated in the microwave, and then deflate back down as they melt and cool. If the bowl is not large enough, the marshmallows may puff up over the top, causing a sticky mess on the bowl and in your microwave. Using a large enough bowl helps to avoid that mess.

Cook the marshmallows for 30 seconds, then remove the bowl and give them a stir. Continue to cook them in 30 second intervals, stirring in between, until the marshmallows are completely melted. Then you can add the rice cereal or continue with your recipe as written. Good luck in the kitchen with your girls!