Q. I like to make big batches of things like soup or pasta so that I can have some on hand for the week. It’s easier for me to make a big batch of two or three dishes, than to cook up separate dishes for every lunch and dinner of the week. The only thing is that when I reheat meals, I reheat it on the stove because I’ve heard that once you microwave something, you can’t reheat it in the microwave again. Since we reheat the same pot of soup for example more than once, I have avoided using the microwave. I would prefer to just be able to heat a plate at a time in the microwave, which would allow for less clean-up and be less time-consuming for me as well. I don’t want to do anything that may be harmful for my family though. Can you microwave leftovers twice? 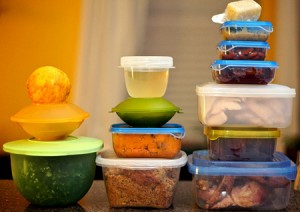 A. This is a common concern for many people, and I think it’s a bit of an old wives’ tale. It may have originated from the fact that some foods just don’t stand up well to being reheated more than once, particularly foods that have a tendency to dry out quickly. The truth is though, most leftovers can be reheated in the microwave twice. For some foods, you may have to make a few minor adjustments to get the results you want.

Soups, stews, and other foods with a high water content should reheat quite nicely in the microwave, even when reheated more than once. It’s foods like pasta or even meats that may end up with a tougher texture after being reheated in the microwave. For dishes like pasta that have a sauce component, try adding a few tablespoons of water to the pasta before reheating it to add some moisture and protect the texture. If you have extra sauce, add that as well, and then place a lid over the dish in the microwave to keep the moisture from evaporating.

The same goes for foods like rice or meats. Try adding a little bit of moisture in the form of water, broth, or a sauce to add some moisture back in to the dish, and then make sure to cover it when reheating to keep that moisture where it belongs rather than letting it evaporate in the microwave.

One Response to “Can You Microwave Leftovers Twice?”